Physics at Northeastern invites you to join an exciting journey to explore, discover, and apply the fundamental principles that run the universe. Take a front-row seat as you visualize everything from the collisions of sub-atomic particles to the dance of the galaxies.

Explore Our Options for Undergraduate Students Why can’t light escape a black hole? What exactly is dark matter? Why is the gravitational force so weak? In physics, we know everything is bound by the same rules and happens for a reason. It’s the “why” of every action and reaction that keeps us curious.

The College of Science physics program equips you with what we know about our universe — theories on matter, the forces, space, and time — so you can reach into the unknown and answer the question… why?

Physics
Theoretical Soft Matter and Biophysics Group
Max Bi
This reearch group is interested in understanding collective and emergent behavior in out-of-equilibrium and disordered systems. The research employs methods in theoretical and computation condensed matter physics and applies to a wide range of biological and non-biological systems.
Visit Website

Physics
Sage Lab
J Timothy Sage
Professor Sage’s research is motivated by a fascination with the physical basis for the function of proteins. He develops and applies novel spectroscopic approaches to understand the structure, dynamics, and function of biological macromolecules.

Physics
Neurogeometry Lab
Armen Stepanyants
Research in this lab is aimed at understanding the basic brain functions and principles of synaptic connectivity in the cerebral cortex through the quantitative analysis of neuron morphology.
Visit Website

Physics
Venkatachalam Lab
Vivek Venkatachalam
Studies of the neurophysiology of C. elegans from its birth to adulthood, which reveals the detailed relationship between the developing nervous system and the animal behavior. Advanced neurotechnology and microscopy techniques are used to measure large populations of neurons in freely behaving a..
Visit Website

Physics
Williams Laboratory for Single Molecule Biophysics
Mark Williams
The Williams Laboratory for Single Molecule Biophysics specializes in the development of single molecule methods for quantitatively probing the biophysical properties of DNA and RNA and for understanding the biophysics of their interactions with proteins and other DNA binding ligands.
Visit Website

Physics
MoBS Lab
Alessandro Vespignani
Alessandro Vespignani’s research activity is focused on the study of “techno-social” systems, where infrastructures composed of different technological layers are interoperating within the social components that drives their use and development.
Visit Website

Physics
Center for Complex Network Research (CCNR)
Albert-Laszlo Barabasi
The Center’s objective is simple: think networks. Research focuses on how networks emerge/evolve, how they look, and how they impact our understanding of complex systems. CCNR’s research has developed to unexpected areas, including the topology of the World Wide Web; complex networks inside th..
Visit Website

Physics
Quantum Matter and Correlated Electron Theory Lab
Gregory Fiete
The Fiete lab has broad interests in condensed matter physics that range from confined electrons at the nanoscale to frustrated magnetism in macroscopic samples. Their research focuses primarily on interaction effects in quantum many-body systems. The theoretical methods they use range from numeric..
Visit Website

Physics
Di Pierro Lab
Michele Di Pierro
The Di Pierro Lab is focused primarily on physical genetics. We are broadly interested in the physical processes involved in the translation of genetic information. We develop novel theoretical approaches to characterize the structure and function of the genome using the tools of statistical physic..
Visit Website

Physics
Cosmology Group
Jonathan Blazek
We aim to unravel the mysteries of the Universe, including the nature of dark energy and dark matter, the laws of gravity on the largest scales, and the earliest moments after the Big Bang. To study these topics, we model and analyze observations of galaxies and other astrophysical objects,..
Visit Website
The Minds Behind COS Physics
Faculty Spotlight Arun Bansil
Physics
Bansil and a team of researchers have discovered new properties in the chemical element bismuth that conduct electricity efficiently, and could prevent supercomputers from frying. Bansil, who found these properties of bismuth concealed within the quantum world, says the discovery will rock modern technology harder than the internet revolution in the 1960s.
Learn more Toyoko Orimoto
Physics
``The Standard Model only describes a small fraction of the universe we know,``
says Orimoto. Her work within CERN's particle collider has given her the chance to study particles such as the Higgs Boson.
Learn more Alessandro Vespignani
Phsyics
Vespignani is the Director of the Modeling of Biological and Socio-technical Systems Lab (MoBS Lab) at Northeastern University. Prediction is an integral component of the work Vespignani and his colleagues perform at MoBs, where the team develops innovative mathematical models and computational tools to better understand, anticipate, and control large-scale complex network systems. In 2016, Vespignani was awarded the Aspen Institute Italia Award for his work predicting the spread of the Ebola virus in Liberia in 2014.
Learn more

The physics program provides a strong foundation in classical and modern physics, including studies of the various physical phenomena such as electromagnetism, dynamics, building blocks of matter, energy, and radiation.

The applied physics BS degree is a flexible, interdisciplinary-oriented program designed to provide students with a solid background in basic physics, in conjunction with the opportunity to sample courses from a wide range of disciplines, including engineering, biology, chemistry, math, environmental studies, and computer science.

The biomedical physics program seeks to understand the role of physical processes occurring on molecular, cellular, or macroscopic scales; in vital biological functions, ranging from the interaction of chemicals with DNA, to the extraction of oxygen from red blood cells, to the generation of complex electrical signals in the brain and nervous system; and physical principles of medical devices.

The data science and physics combine major brings together computer and data science, physics, and mathematics. From hands-on experience with sophisticated physics instruments, to mathematical theory, to the latest computational innovations, our interdisciplinary approach is designed to prepare students for the myriad challenges in today’s rapidly changing world.

Mathematics and physics have been linked since antiquity. By combining physics and mathematics you can take closely related courses in each discipline, such as statistical mechanics and stochastic processes, mechanics and dynamical systems, thermodynamics and Fourier Series, and quantum mechanics and partial differential equations.

The combined major in physics and music provides a strong foundation in classical and modern physics, including studies of the various physical phenomena including electromagnetism, dynamics, building blocks of matter, energy, and radiation.

The combined major in physics and philosophy provides a strong foundation in classical and modern physics, including studies of the various physical phenomena including electromagnetism, dynamics, building blocks of matter, energy, and radiation.

This intercollege combined major serves students who would like to explore their interest in physics while earning the benefit of a Bachelor of Science degree in chemical engineering.

This intercollege dual major serves students who would like to explore their interest in physics while earning the benefit of an accredited Bachelor of Science degree in engineering.

This intercollege combined major serves students who would like to explore their interest in physics while earning the benefit of an accredited Bachelor of Science degree in engineering.

The physics minor provides a foundation in classical and modern physics and allows students to explore more advanced topics in physics through elective choices.

Physics is paired with one of three concentrations in electrical and computer engineering providing students with practical skills to apply fundamental physics to the development of engineering solutions.

The Department of Physics offers Master of Science degrees with several options. The standard physics MS can be obtained by taking a specified set of courses without an MS thesis. Alternatively, an MS thesis may substitute for 8 credit hours of course work.

The PhD program in network science aims to enhance our understanding of networks arising from the interplay of human behavior, sociotechnical infrastructures, information diffusion, and biological agents.

The Graduate Certificate in Nanomedicine is designed for scientists, engineers, and physicians to develop competency and practical skills in the application of nanotechnology to problems in medicine. This program is appropriate for those working in or seeking careers in biotechnology, pharmaceutical, biomedical, or clinical fields.

Prospective students for College of Science Master's, Graduate Certificate, PhD, or other Graduate level programs must apply online using ApplyYourself.
Meet our Faculty
Apply Today
Contact
Schedule a Visit
Coursework and Requirements
A sampling of the types of courses you could take here.
Biological Physics
PHYS 4621

Offers an introduction to biophysics focusing on development and implementation of physical models for various biophysical processes that occur in living organisms and in living cells.

Reviews experiments demonstrating the atomic nature of matter, the properties of the electron, the nuclear atom, the wave-particle duality, spin, and the properties of elementary particles, and introduces the special theory of relativity.

Watch Our Video to Learn More About the COS Physics Program

Watch Our Video to Learn More About the COS Physics Program 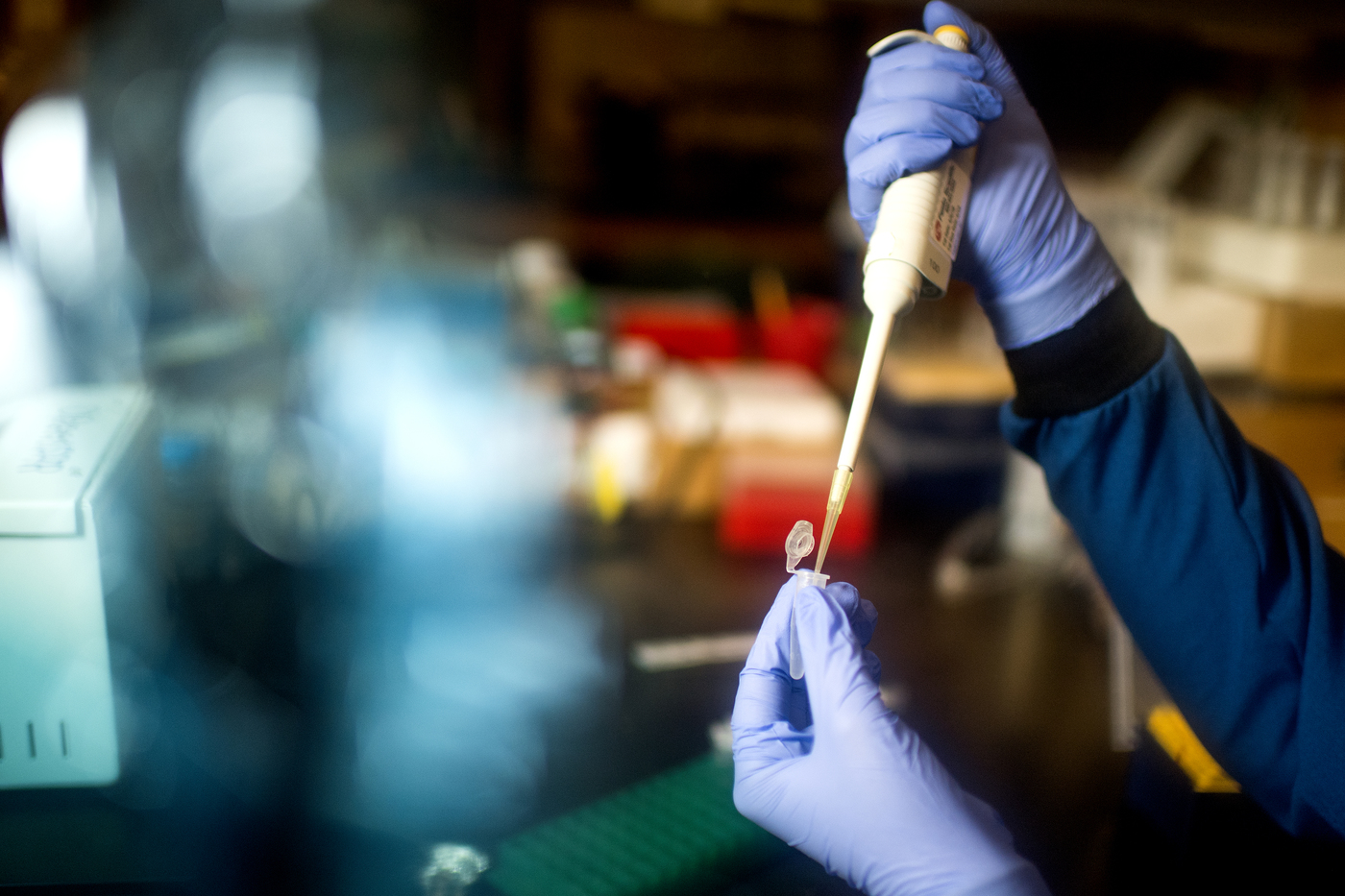 Read the latest newsletter from the Department of Physics.

From Theory to Practice

Northeastern Physics students value their experiences in a variety of work settings ranging from research and technical positions in corporations to research assistantships in cutting edge labs on campus or abroad. Our signature co-op experience provides a great opportunity to strengthen technical and professional skills.

Physics and Math combined major Jameson O’Reilly had the opportunity of a lifetime with two of his classmates to spend his co-op at the European Organization for Nuclear Research in Geneva, Switzerland, more commonly known as CERN. While there, O’Reilly had the chance to work hands-on building and testing prototype miniature cathode strip chambers, miniCSCs. His work helped to design prototypes that would use gas mixtures that are less likely to contribute to greenhouse gases, like the current chambers do. Even after his co-op ended, O’Reilly was able to continue working for CERN on an extension of his project remotely, through an undergraduate research grant Omicron is setting records. How much do the numbers matter? When Will The Omicron Surge Be Over? Very Soon. Omicron moves fast. Here's what that means for the next few weeks. COS Connects: What are quantum materials anyways?