Just about every field of research is confronted with networks. Metabolic and genetic networks describe how proteins, substrates and genes interact in a cell; social networks quantify the interactions between people in the society; the Internet is a complex web of computers; ecological systems are best described as a web of species. In all these fields the detailed knowledge of the components is insufficient to describe the whole system. Since 1960, when Paul Erdos introduced the influential random graph theory, complex networks have been modeled as fundamentally random graphs. Our work has mounted a serious challenge to this view. By investigating the topology of the World Wide Web, Internet, cellular and social networks, we discovered that networks in nature follow a common blueprint, having scale-free characteristics. These results represent a significant paradigm shift: scale-free networks and the associated dynamic network modeling are a completely unexpected turn of events with a strong impact on every research area for which networks are relevant. We are currently exploring a wide range of network structures, asking questions pertaining to the error and attack tolerance of complex networks, their robustness, and trying to address the dynamics of networks in general. We are also pursuing a strong research program applying network theory to biological systems, aiming to uncover the inner chemical architecture of the cell.

The Center’s objective is simple: think networks. Research focuses on how networks emerge/evolve, how they look, and how they impact our understanding of complex systems. CCNR’s research has developed to unexpected areas, including the topology of the World Wide Web; complex networks inside the cell, and the Internet’s Achilles’ Heel.

Albert-Laszlo Barabasi in the news June 6, 2022
Has your food been chemically altered? New database of 50,000 products provides answers.
Northeastern researchers have discovered a way to outline the components of any given food, cluing us in to what our food is really made of—and what it took to get to your plate.
Read More June 18, 2020
Finding the Needle in the Data Stack: Advice from a Facebook Data Scientist
During her time at Northeastern, Delia Mocanu developed a passion for network science. Now at Facebook, she finds herself working on one of the largest data experiments in history — the News Feed.
Read More April 6, 2020
Network Scientists Identify 40 New Drugs to Test Against Covid-19
Researchers at Northeastern mapped the way proteins within human cells behave after the cells are hijacked by the virus to identify drugs that might be able to fight it. The team is now working with other experimental researchers to begin testing those drugs.
Read More January 27, 2020
It’s Not Just Your Genes That Are Killing You. Everything Else Is, Too.
Environmental factors drive the majority of our risk for non-communicable diseases, says Albert-László Barabási, Robert Gray Dodge Professor of Network Science at Northeastern. We need to be studying them.
Read More December 19, 2019
You are What You Eat. But What are You Eating?
The USDA tracks only a fraction of the chemical compounds in our food. Giulia Menichetti, an associate research scientist at Northeastern’s Center for Complex Network Research, is trying to map all of them, to help us live longer, healthier lives.
Read More November 15, 2019
150 Years of Science in a Cosmic Web of Paper Trails
An analysis of Nature’s database by Barabási’s team reveals that interdisciplinarity has been increasing in science overall for the past 110 years. No longer are the scientific disciplines being siloed off from each other.
Read More April 6, 2018
Scientists decode what makes a New York Times bestseller
Northeastern network scientist Albert-László Barabási and his colleagues have developed a model that harnesses the power of early sales data to predict how many total copies a book will sell. Their analysis uncovers a sales pattern that is common to all books and offers insight on what it takes to make the Times’ bestseller list.
Read More March 5, 2018
How big data and the science of science can revolutionize discovery
Northeastern network scientists Albert-László Barabási and Alessandro Vespignani want to “push the pedal” on science and its benefit to society. In a paper published Thursday in the journal Science, they described lessons learned from a literature review of the science of science.
Read More

November 16, 2017
Northeastern researchers discover fundamental rules for how the brain controls movement
The human brain is a mysterious supercomputer. Billions of neurons buzz within an intricate network that controls our every thought, feeling, and movement. And we’ve only just begun to understand how it all works.
Read More November 4, 2016
New study: Success can come at any age
New research led by Northeastern network scientist Albert-László Barabási shows that, contrary to conventional wisdom, creative breakthroughs in science can come at any age, in the 20s, 40s, even 70s.
Read More February 17, 2016
Researchers find the tipping point between resilience and collapse in complex systems
Using statistical physics, network scientist Albert-László Barabási and his colleagues have developed the first-ever tool to identify whether systems—be they technological, ecological, or biological—are in danger of failing.
Read More 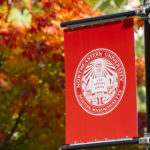 October 4, 2013
Researchers use science to predict success
Like the rest of the aca­d­emic com­mu­nity, physi­cists rely on var­ious quan­ti­ta­tive fac­tors to deter­mine whether a researcher will enjoy long-​​term suc­cess.
Read More September 25, 2013
A kid in a network shop
There are some ques­tions that you don’t need to be a sci­en­tist to ask. You need to be a little kid.
Read More July 15, 2013
A wiring diagram for disease
The human genome is a vast parts list for the inner works of our biology.
Read More June 19, 2013
Science of Success — Why are people actually successful?
Albert-László Barabási fielded questions about how someone or something becomes successful - it's not always because he or it is the best.
Read More June 11, 2013
Researchers to explore the ‘Science of Success’
We once thought it took a genius to be suc­cessful, but this is simply not the case.
Read More

February 19, 2013
Researchers transcend boundaries for science
Throughout the 179th annual meeting of the Amer­ican Asso­ci­a­tion for the Advance­ment of Sci­ence, North­eastern fac­ulty led pre­sen­ta­tions high­lighting their work to address real-​​world chal­lenges in areas ranging from health to tech­nology to sus­tain­ability.
Read More

February 15, 2013
Complex systems made simple
Just as the name implies, com­plex sys­tems are dif­fi­cult to tease apart. An organism’s genome, a bio­chem­ical reac­tion, or even a social net­work all con­tain many inter­de­pen­dent components—and changing any one of them can have per­va­sive effects on all the others.
Read More
Load More