We Know Exercise Is Good for Your Skin. This Protein Mimics Those Effects in Mice.

If I cut myself while chopping vegetables, the cells in my skin would repair the damaged tissue in days or weeks, depending on the severity of the wound. Big or small, that cut would eventually close because that’s my skin’s job as the first line of defense against an outside world full of infections and unwanted microbes.

But as much as skin is an organ of protection, it is also an organ of youth. Like other cells in the body, the ability of skin cells to repair themselves declines with age. That’s why elderly people are particularly susceptible to risks from open wounds that heal slowly—sometimes too slowly, or not at all.

Scientists are just beginning to understand the cellular processes that lead to aging and slow healing in skin cells. Current therapies, which include stimulating cellular growth and novel compression bandages, still fall short of helping aging people, says Justin Crane, an assistant professor of biology at Northeastern who leads a lab that focuses on these processes.

“These strategies are somewhat effective, but in aging skin, there’s a lot of room for improvement,” Crane says. “There are still some defects that we think are inherent to these cells themselves that are not being addressed.” Scientists don’t yet understand the effects of aging on the cellular processes involved in skin healing. Justin Crane, an assistant professor of biology at Northeastern, and Wesley Wong, a fourth-year doctoral student in Crane’s lab, are studying these processes in aging mice to boost new anti-aging therapies for people. Photo by Matthew Modoono/Northeastern University

In a study published in November, a team of Northeastern researchers led by Crane outlined a mechanism that improves the ability of skin cells in aging mice to heal wounds.

The team found that low doses of a protein called interleukin 15 improved the capacity of skin to heal in old mice by mimicking some of the anti-aging benefits of exercise. In the human body, that protein is critical for the process of energizing all cells, and it is found in abundance in people who exercise more.

Skin healing is an elaborate process that involves a lot of moving parts. It coordinates messaging and signaling across various types of cells that age differently, orchestrating several processes in sequences that need to be carried out with smooth timing for cells to be repaired.

Scientists don’t yet understand the effects of aging on every type of cell involved in skin healing, Crane says, but finding that a single type of protein could take on that process was unexpected. That’s because it would be easy to assume that an intricate environment consisting of different layers of cellular dynamics would need several components to recover the ability of skin to heal. 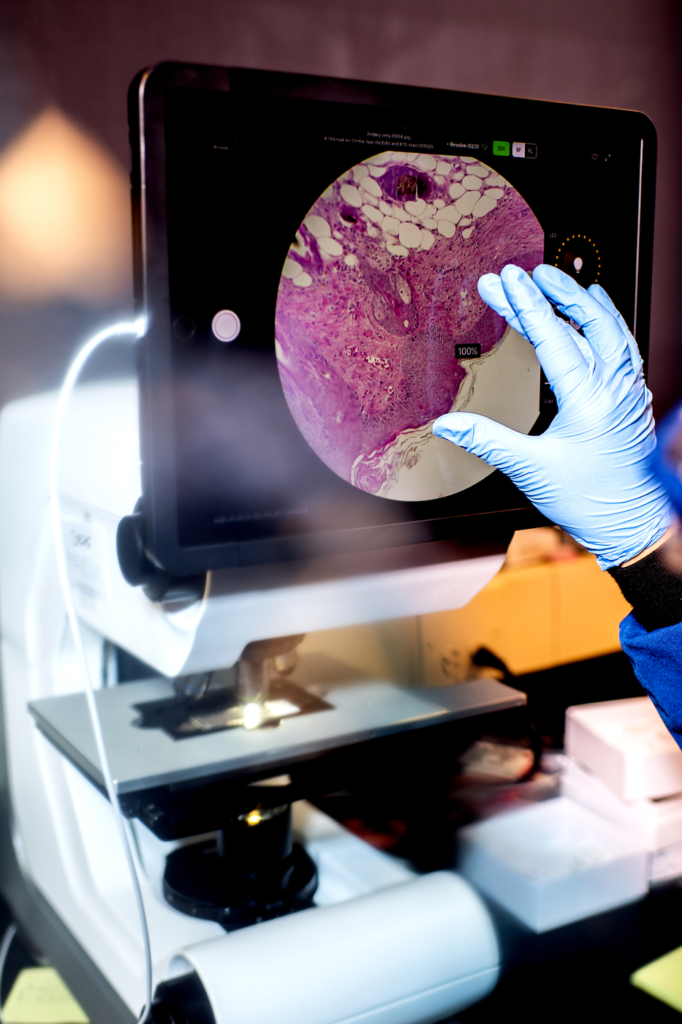 To analyze the role of the interleukin 15 protein in aging and skin wound healing, Crane and Wong used samples of skin tissue from aging mice and found that the protein mimicked the anti-aging benefits of exercise. Photos by Matthew Modoono/Northeastern University

“What we found is a fairly comprehensive rescue, or at least fairly complete with just the one factor,” Crane says. “Either IL-15 is stimulating multiple other processes to go in sort of a domino fashion—which is totally possible—or it’s just a very potent activator of very important pathways.”

In 2015, Crane spotted the benefits of interleukin 15 in people while he was conducting his doctoral research at McMaster University, in Hamilton, Ontario. That study suggested that in older human skin cells, exercise played a key role in boosting the functions of mitochondria, the organelles within human and animal cells responsible for generating energy.

Crane observed reduced signs of skin aging in people who exercised often, identifying higher levels of interleukin 15 than in people with more sedentary lives. Testing the protein in mice also mimicked some of those anti-aging effects.

The new tests are taking those findings further and probing the inner mechanisms of skin cells that could help the protein reverse aging and help it repair damage. In the long run, reversing the effects of aging could mean improved health for elderly patients.

Crane says the next step would be to start finding pharmaceutical drugs that mimic the effects of interleukin 15. Because the protein has already been approved by the U.S. Federal Drug Administration for cancer immunotherapy, a new type of treatment based on this protein could speed the years-long regulatory process that new drugs need to clear before reaching patients.

That’s more likely, Crane says, because researchers would be able to use much lower doses of interleukin 15 than that which is being used for cancer therapy.

“Rather than if it was some random, untested new molecule that no one’s used before in a human body, which would make it very difficult,” he says.

After experiments to see how effective it can be, the treatment could also target other types of organs besides skin, and improve wound healing for diabetes and other conditions that impair healing and expose patients to serious health issues.

“Other researchers have shown that IL-15 seems to have a wound healing improvement in the diabetic mouse as well,” Crane says. “There’s very much a chance that this can hit multiple types of organs in the body and be very broadly beneficial.” This story was originally published on [email protected] on January 17, 2020.