Car exhaust is one of the most pervasive forms of pollution. Internal combustion engines dump tons of nitrogen oxides, ozone, dangerous particulates, and carbon monoxide in urban areas throughout the world. While the harm is quiet, it is not abstract—vehicle emissions are directly implicated in over 50,000 early deaths in the United States alone.

But imagine a car that doesn’t pollute, runs on hydrogen gas, and emits only clear, fresh water. Northeastern professor Sanjeev Mukerjee has, and these fuel-cell powered cars are already on the market. Mukerjee, who founded Northeastern’s Center for Renewable Energy Technology, has spent his career developing clean energy. Born in India, he stumbled onto fuel cells shortly before earning his doctorate in chemistry at Texas A&M.

He then made what he described as “the best decision of my life,” turning down a job at Dupont Chemical for a research position at Brookhaven National Laboratories with half the salary. He later joined Northeastern, where he has worked for two decades as a professor of chemistry and chemical biology. At Northeastern, he says, “our chief research mission is fuel cells and batteries: clean energy transmission and storage.”

Currently, the commercial use of fuel cells is limited. This is not because of their complexity; their mechanism is simple chemistry, as hydrogen ions combine with the oxygen in the air to form water and release stored chemical energy in the process. 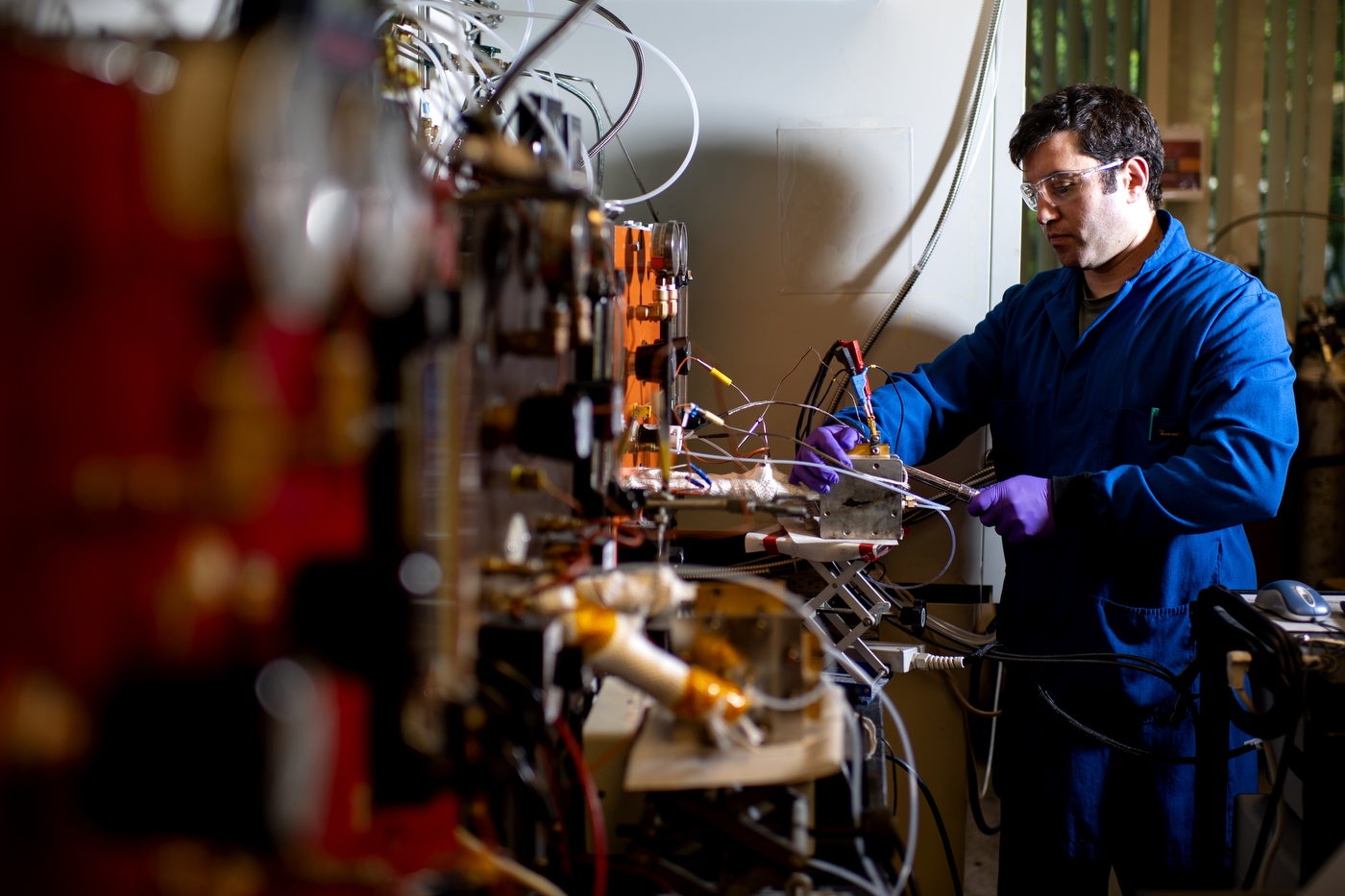 The reaction takes place within a specially designed catalyst membrane, ensuring that the reaction results in usable electricity, instead of explosive heat or light. Since the energy is transformed directly into electricity, fuel cells are many times more efficient than traditional combustion engines.

Fuel cells are currently restrained by their cost, as the most effective mediators for the reaction involve using noble metals, mainly platinum.

“There’s sustainability considerations as well,” says Mukerjee. “You can’t rely on platinum for however many billions of cars there are.”

Mukerjee’s research focuses on developing catalysts that don’t rely on expensive, rare metals, bringing the cost of fuel cells down and creating a competitive alternative to fossil fuels.

His work has garnered significant attention; Mukerjee is often invited to speak at scientific conferences and was recently named a fellow of the International Society of Electrochemistry.

For many years, the creation of fuel cells was stymied by the fact that significant quantities of energy are needed to separate hydrogen from oxygen—energy that most often comes from fossil fuels.

Mukerjee’s work is to make this no longer an immutable fact.

“This is a quiet revolution,” says Mukerjee, “The cost of renewable electrons has really come down dramatically.”

If hydrogen fuel cells can be sustainably and reliably created via solar or wind power, he says, it would become possible to have a truly carbon-neutral energy system—one completely decoupled from fossil fuels.

Mukerjee sees great potential in energy storage technology, and hopes that advances will eventually lead to a fully decentralized power grid. With the help of his Northeastern Center for Renewable Energy Technology, Mukerjee has an international platform, and works with scientists around the world to help make this dream a reality.